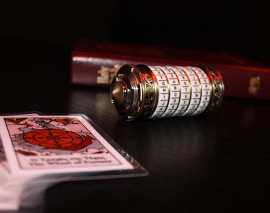 William T. Franklin, the world renowned archaeologist and his family were brutally murdered, their home searched over. The police are desperately looking for the one or ones responsible for this slaughter unaware that the threads would lead to the fading of history.

Professor Franklin had been a member of an ancient, secret organization; the knowledge of this mystic order dates back to the age of the pyramids boasting leaders during its existence like Aristotle or Newton – but its most influential figure to date has been the renaissance genius, Leonardo da Vinci.

The professor might have died because of the centuries-old secrets of the mysterious order but his murderers had not discovered a well-disguised room in their victim’s house. The Order sends several of its members to the spot to search for the illustrated documents locked in the professor’s safe which might be able to determine the course of history. They might as well get to know the secrets of the New World Order.

In a most unique way, players will act as different characters during the game including a historian, an expert of symbols or a mathematician. Each character possesses personal skills that help them get along.

Take the role of a scientist and get out of the secret room of the professor before the air runs out!