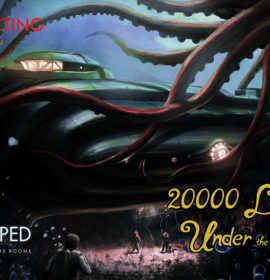 “Two years after the disappearence of the legendary Nautilus, a team of experienced divers embarks on a journey to explore the abyss, 20.000 leagues under the sea! Rumors say that the vessel exists and furthermore there is evidence of life. The team finds and manage to board the famed submarine, but something weird is going on! Professor Aronax is alive, but a strange power has taken hold of Captain Nemo. He is now in a comatose state and has been transformed into a monster. As soon as the submarine’s security systems sense the intrusion, the self destruct sequence is activated…in 90 minutes the nuclear reactor that powers the vessel will explode! Panic sirens wake up evil Nemo…” A LIVE 90 MINUTES ADVENTURE FULL OF ACTION, LIVE ACTING, SUBMARINE CAVES, PRISONS, MONSTERS AND THE LEGENDARY SUBMARINE THAT REALLY MOVES, CHALLENGE YOU TO LIVE AN UNEXPECTED ESCAPE EXPERIENCE!

Let your team know:
ΒΟΟΚDisclaimer:Before Booking this room make sure it is available to be played in English by asking the company that owns it through their website.